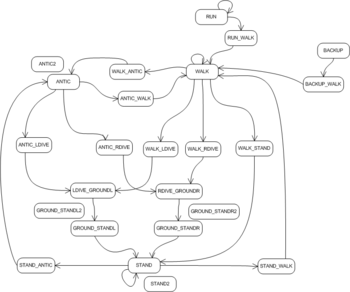 Some states have alternatives, for example STAND and STAND2. These two states are associated with different animation sequences to add a little variation to pedestrian behaviour. MM2 selects one of the states randomly and the alternative state uses the same transitions as the original state. {clr}

The format is a comma separated table, each row defines one state and is constructed of the following values in this order:

The state names are defined by MM2, the MM2 AI engine calls only for these states. However, it might be possible to create additional transitional states, i.e. the states that are named as STATE1_STATE2. These are made to make smooth transitions from one looping state to another. It might be possible to add custom chains of such states without disrupting the AI engine.